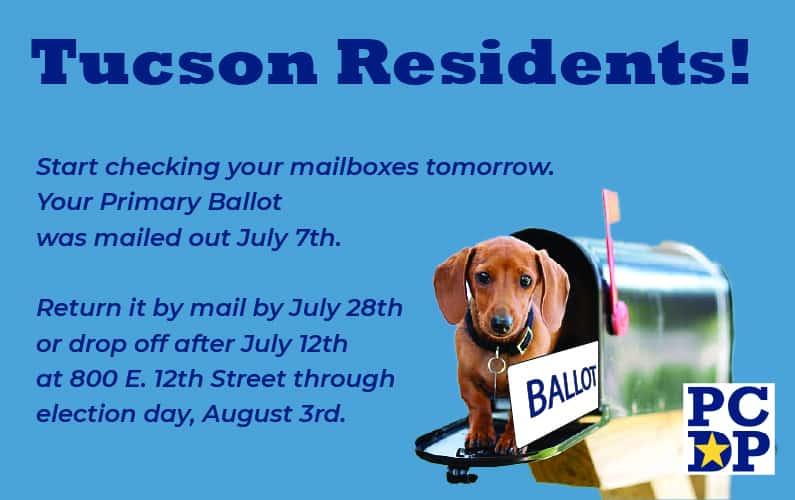 This is a VOTE BY MAIL election for all voters.

You can attempt to find more information at the Tucson Election Department.

City Council Elections and Why You Should Pay Attention

The city of Tucson will hold a primary and a general election in 2021 for City Council Wards 3, 5 and 6.  The primary will be on August 3 and the General Election will be on November 2.  Both of these elections will be BY MAIL ONLY.  You will not have to request a mail-in ballot – it will automatically come to you.

Tucson does its city elections a little differently than most other places (of course it does).  The primary election will be held only in the Wards that have open seats, so that is 3, 5 and 6. But the General election is city-wide and all registered voters in Tucson will have the chance to vote in these three races.

If you don’t know what city Ward you live in, you can check your voter ID card; you also check at recorder.pima.gov and click on Voter Information.

If you have moved recently, ensure that you RE-REGISTER to vote using your updated address,

Why are City Council elections important?  Tucson is governed by the six-member City Council, with a Mayor and a hired City Manager.  This form of government is called a council-manager form of government. The role of the Mayor in Tucson government is fairly weak, compared with the Council.  City Council decides the budget of the City – what money comes in and what funds are expended.  The current budget for the city of Tucson is $1.7 billion.  The website for the City of Tucson is https://www.tucsonaz.gov/.

It is important that we elect people to City Council who share our Democratic values and vision of what government should be. Much of what we think of as every day quality of life in our city is controlled by the City Council.  Here are some examples of what our City Council spends our taxpayer money on: Police and fire; streets; parks & rec; air & water quality; trash and recycling; water and sewage services; legal services (prosecutor and public defender); building codes and permits; public transportation; infrastructure projects; Reid Park Zoo.

And what can City Council members do for us?  Your elected City Council member is your connection to the city government.  Their offices are staffed with people who stand ready to help you with your questions and issues.  For example, say someone is dumping refuse in the wash behind your house or in a utility easement near you. Say someone is spraying graffiti on your wall.  Say you need some help in determining if you are allowed to build a guesthouse on your property. Say you have a gigantic pothole on your street.  Your City Ward office is a great first call, to get guidance on which department can best handle your needs and also get some advocacy in dealing with the red tape.

Local government is important to you and to your family.  Our local elected officials stand ready to help you!  So, ensure your voter registration is up to date and be on the look-out for your city election ballots in August and November.  If you have questions about the elections or the candidate, you can contact the Pima County Democratic Party at (520) 326-3716.