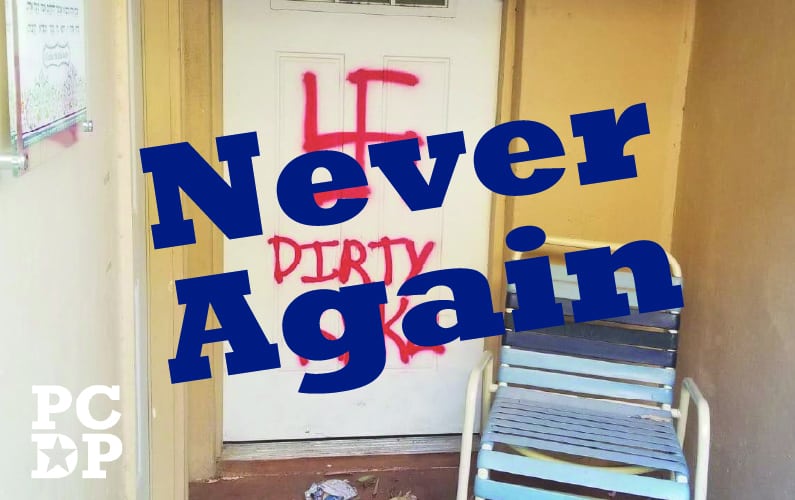 June 7 was another sad day for Tucson. Another synagogue was vandalized, the second in less than three weeks. It’s a sad reminder that antisemitism—a fact of Jewish life for the 5,781 years that Jews have existed—is alive and well in the country whose soldiers liberated the German concentration and death camps.

This is personal, because I am Jewish. I went to Hebrew school and became Bat Mitzvah. In Hebrew school, we learned about Hitler and Nazi Germany. When I was 12, we saw a documentary called, “Let My People Go,” that showed graves filled with naked, emaciated bodies…Jewish bodies. It showed the “showers’’ that Jewish families were told to take—actually gas that would kill them. It showed the ovens that turned Jewish bodies into ash.

I came home that day angry at my parents. My parents were in high school in California, when Adolf Hitler put his “final solution to the Jewish question’’ into operation, eventually annihilating six million Jews. The Third Reich also targeted disabled people, the LGBTQ community, the non-white Roma, Jehovah’s Witnesses and other “undesirables’’ seen as polluting the Aryan “master race.’’

At the same time, my parents’ Japanese-American friends started disappearing from school, their families trucked off to internment camps by federal-government order. I asked, “Why didn’t you do something?”  Of course, there was no Internet or 24/7 news, as there is today, and they said they didn’t know. To pre-teen me, that was not an excuse.

After we watched the documentary, our teachers vowed, “NEVER AGAIN.” It breaks my heart that this remains aspirational. I never thought that in my lifetime, American Jews would be in fear of their lives in their own country. But Jews are under attack all over the country, as the Republican Party fully embraces white supremacy. The past president, who remains his party’s undisputed leader, called torch-carrying neo-Nazis “very fine people.’’ They are not very fine people; they’re a threat to all minorities and to democracy itself.

The Anti-Defamation League estimates that antisemitic violence increased 75 percent following the recent Israel/Hamas war in Gaza. Jews have been attacked on the streets of “blue’’ New York and Los Angeles, as some conflate being Jewish with Israeli government policy (and others use the war as cover for plain old antisemitism).

Democrats must continue to fight all racist attacks. We must be allies to all targets of racial/ethnic violence. We must point out to every voter how dangerous the Republican Party has become, as its leaders continue to fuel the racist fire that has been burning for millennia. Indeed, our nation was founded on the assumption of white supremacy—an uncomfortable fact that Americans are still trying to mitigate.

For decades, white supremacists were shamed into the shadows. Now they are in our government. This must be top of mind as Democrats face the very real possibility that our party could lose its congressional majority in 2022.