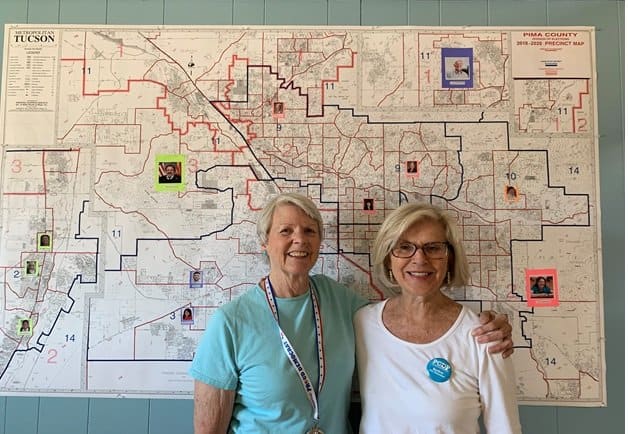 Margaret “Leftie” Weld Vaughn, and Barbro Drott Huth, avoid the spotlight. PCDP’s volunteer coordinators prefer to operate quietly behind the cubicle wall that shields their adjacent desks at headquarters. Their task: to recruit new volunteers, effectively deploy the 24 volunteers – including themselves – who’ve already signed on, and manage their HQ activities.

I wanted something big to do to get rid of Trump,’’ said Leftie.

Trump’s election left Barbro “sobbing,’’ and wondering what she could do about it.

What she and Leftie did was throw open headquarters’ door to people with a variety of skills. A recent triumph: recruiting a blackjack dealer who worked the PCDP’s recent Udall Dinner at the Desert Diamond Casino & Hotel.

“She was so inspired by what she heard that she decided to volunteer,’’ Leftie said. “She’s now working the help desk!’’

“People are so interested in being involved,’’ said Barbro. Some like the front desk, others enjoy data entry, writing thank-you notes, answering routine calls, or keeping party materials up to date.

Before settling down in Tucson in 1999, Leftie was a citizen of the world. Her father was a career diplomat who served in embassies in Greece, France, Morocco, and the United Kingdom.

“It was an idyllic childhood,” said Leftie, who speaks French, Spanish, Arabic and Greek.

After graduating from New York’s Wells College in 1966, she joined the Peace Corps to teach English in Chad, not knowing what a significant role the Peace Corps would come to play in her life.

“I’ve been interested in politics since Adlai Stevenson,” Leftie said. “I was a speech writer for Hubert Humphrey when I was introduced to Jack.”

Jack was also a professional boxer, who coined his left-handed future wife’s nickname. They had two children before Jack died in 2012. Leftie has three grandchildren. She lives in LD10.

Barbro, who lives in LD9, came to the U.S. from Sweden in 1977 to do graduate work at UCLA. She married USC physicist Gerald Huth – who wrote scholarly works with titles like, “A Modern Explanation for Light Interaction with the Retina of the Eye Based on Nanostructural Geometry: Rethinking the Vision Process’’ – and taught Swedish at UCLA.

Following Gerry’s early retirement, the Huths, who had one son, moved Ojai, CA, and kept a place in Arizona.

“We grew citrus for 20 years,’’ said Barbro, who relocated permanently to Tucson after Gerry died in 2011. The following year, she got involved with Ann Kirkpatrick’s and Kyrsten Sinema’s campaigns.

In her spare time, Barbro weaves geometric-patterned tapestries on her loom. Take a look here.

Barbro and Leftie make this offer to prospective volunteers:

“Come in and try it out,’’ Barbro urges. “Meet nice people. We have special projects.’’

Adds Leftie: “You’ll be helping all the candidates.’’