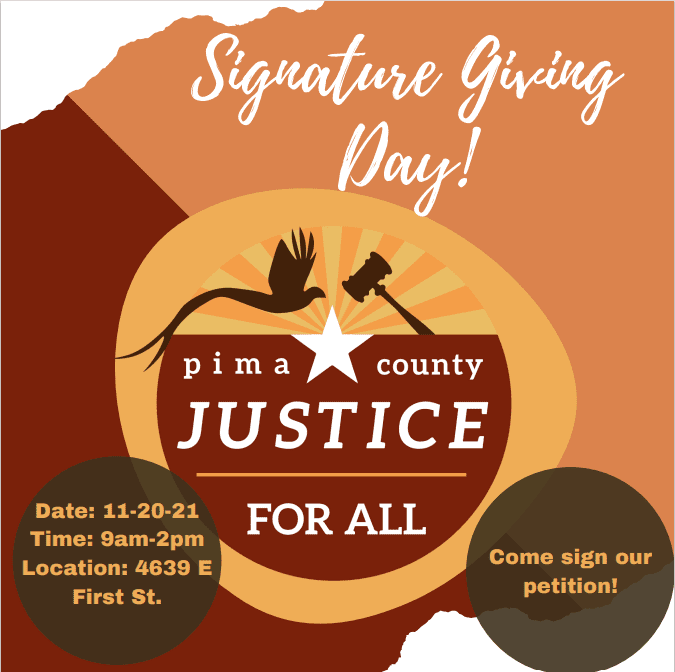 Come sign our petition to get our initiative on the ballot next year!
Other initiative petitions available to sign as well!

Fall is finally here and the temperature outside is getting cooler. I wish the political temperature would cool down, too, but that is just not the case.

At the beginning of August, we had the city Ward primary election. The candidates are Kevin Dahl, Ward 3, and Steve Kozachik, Ward 6. Richard Fimbres, Ward 5, did not have a challenger. I met with all the candidates, plus Fight for 15, to determine how we were going to get the vote out for the all-city mail-in election, and we came up with a plan. PCDP, in coordination with the 15/30 Project Field Organizers and Mission for Arizona, will be coordinating canvasses starting on October 9, and every Saturday until October 30, out of PCDP Headquarters. October 9 is also the kickoff for Mission for Arizona’s canvassing efforts to get Mark Kelly on the 2022 ballot. Canvassers will be carrying a flyer created by Linda Ekstrom in LD9 – thank you Linda!

HQ was full of activity in August and September, as we received a steady flow of people coming in to sign petitions. Arizona Deserves Better also held two petition signature events at HQ in September. Although the Arizona Deserves Better referendums didn’t make the ballot, there were two Invest in Arizona petitions, 1783 and 1828, that will be on the ballot in 2022. We did our best. Unfortunately, two of the voter suppression laws will go into effect. One that was challenged in court will not go into effect at this time due to a judge’s ruling.

The first set of redistricting hearings were held in August. There were two in-person hearings with the Commissioners in Tucson. The Republicans showed up in droves, dwarfing us…and not wearing masks. Their focus seemed to be creating a white, Christian district. They all said the same thing over and over again for two days. On the first day, we didn’t have many people or speakers. The second day was better, with more people showing up to speak.

The grid maps were released in early September and our mapping team that Susan Bickel put together began drawing maps. Susan put together a great plan to get more people and speakers at the September 29 in-person hearing. Unfortunately, the Commissioners were not physically present this time,  and once again, the Republicans were there in droves with their red shirts and MAGA hats, complaining that they refuse to wear masks, even after being told they must. However, the great news is that we had more speakers than they did this time! THANK YOU, Susan!

In September we also had the State Committee Meeting. The State Committee Representatives voted on a resolution to send a letter of no confidence to Senator Kyrsten Sinema if she continues to not support voting rights, organizing rights, and president Joe Biden’s Build Back Better agenda. It appears she is pandering to her donors, betraying her constituents in Arizona in the process.

October is shaping up to be another busy month. We will be having a fundraising event, Arizona Women in Leadership on October 22 featuring Secretary of State Katie Hobbs, County Recorder Gabriella Cazares-Kelly, and Mayor Regina Romero. It will be held in person at the Tucson Botanical Gardens. Check the PCDP website for more details!

Enjoy our lovely Arizona Autumn weather, and keep an eye out for updates on the election and other exciting events!

The PCDP newsletter is back! We took a short break over the summer, but we didn’t stop our work at Headquarters. Quite the opposite!

We started June with two virtual Ward Forums, one for Ward 3 and one for Ward 6. Both were a success as people got a chance to hear the Democratic candidates for the City primary election, which was held on August 3rd.

Our final, Democratic candidates for the City election are:

Wards 3 and 6 have Republican and Independent challengers for the General Election; Ward 5 does not. The General Election on November 2nd is a city wide, mail-in election. Because of these challengers, we can’t take any victory for granted! It is as important as ever that we Get Out the Vote!

July was our busiest month so far this year. We started July with an HQ opening event; up until that point, HQ was open by appointment only. Unfortunately, just as we reopened, the Delta variant raised its ugly head. We are still open, but masks are required inside. It’s an important reminder that the pandemic is still a very real threat, and it’s critical that we continue to treat it seriously and not slack off when it comes to being safe.

Our next event in July was the “We CAN (Climate Action Now) Fundraiser” featuring Dr. Michael Mann.  Arizona Corporate Commissioner Sandra Kennedy also spoke about what is happening in Arizona regarding climate change. This was a virtual fundraiser, with an in-person VIP event for our sponsors and Catalina Democrats at HQ.

The latest events concern the referendum petitions. PCDP is a depot for the Arizona Deserves Better (ADB) and Invest in Arizona (IIA) referendum petitions. ADB and IIA are both campaigns spearheading referendum drives to challenge some bad bills passed by the AZ Senate. The Arizona Deserves Better petitions address voter suppression laws, while Invest in Arizona petitions address state tax laws that defund public education. There are six total petitions, with a deadline of September 15th to get all signatures in. Check our website, pimadems.org/petitions, for more information about the petitions. You can also use https://linktr.ee/TAGGAZ to find signing events at PCDP and elsewhere.

Our ADP Project 15/30 Field Organizers, Lauren Burson and Vivian Morrison, started in July. ADP believes field organizing is a year-round activity, which I couldn’t agree with more. Their main goals are voter registration, party building, and helping with redistricting, and they have already started working with the LDs on these critical projects.

August 21st was PCDP’s annual Committee meeting. There were three matters we needed to vote on, with the most important being the election of new Officers. We also passed changes to the PCDP Platform and By-Laws. ADP Chairwoman Raquel Terán spoke to us about ADP’s strategy going into the 2022 election cycle and stressed the importance of registering voters to close the vote gap.

I’ve been telling our LD Chairs over and over again, there is no “off” year. This year we have a city election, which is key for our 2022 election strategy to Get Out the Vote. In addition, we need to get the required signatures for the referendum petitions in order to put a stop to these horrible bills that were passed in this year’s legislative session. Only with your support can we achieve these goals and ensure we get Democrats elected up and down the ballot, and keep up the fight to better the lives of the people of Pima County.