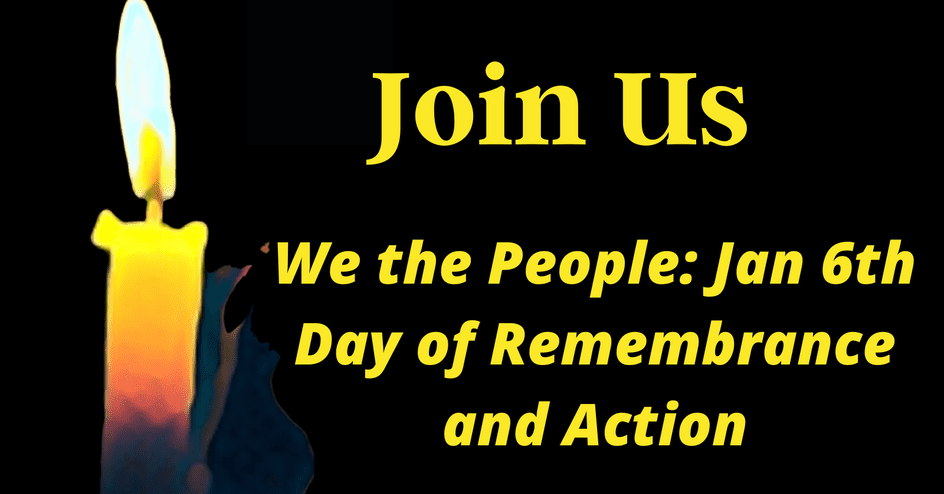 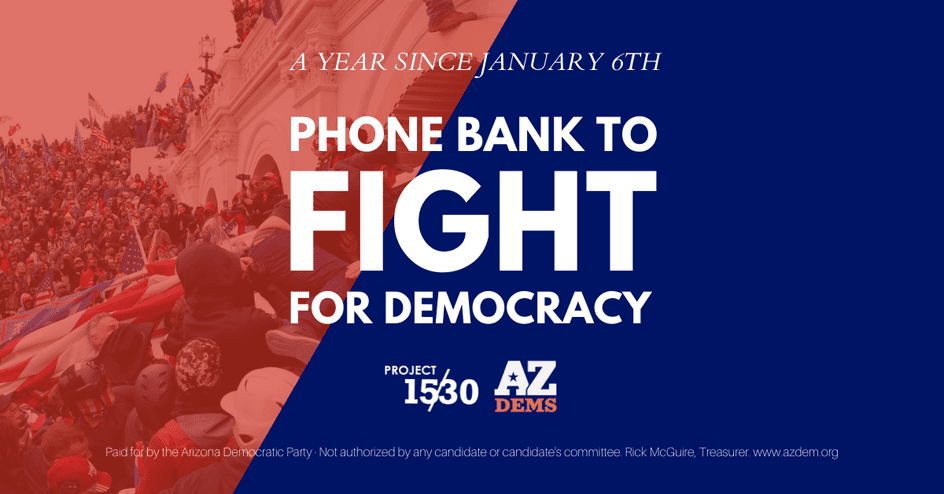 Fight for Democracy | Week of Action

It’s almost been one year since the attacks on our Capitol on January 6, 2021. Join Project 15/30 across the state on Zoom to rally together around our responsibility and desire to unify as Arizonans and Americans to ensure what happened on January 6, 2021 never happens again.

As extremist Republicans like Andy Biggs and Paul Gosar have used the January 6th tragedy as a means to divide us, we will be talking to voters who left the Republican party in search of common sense leaders.

Sign up for a shift to make calls with us HERE

Regardless that Representative Mark Finchem (R-LD11) does not directly represent Arizona Legislative District Nine, his recent actions in the Arizona House of Representatives directly impact our district, our state and our country.

We fully concur with Legislative District 11 Democrats in their declaration that LD11 Representative Mark Finchem has unequivocally disqualified himself from serving as a state or federal official. Finchem’s betrayal of his oath of office cannot stand.

We fully support LD11 Democrats in their request to strip Rep. Finchem of all Arizona State House leadership and committee positions, effective immediately.

Legislative District 9 Democrats are proud to stand in solidarity behind the recall effort of Representative  Mark Finchem.

“Trump encouraged a terrorist mob to rampage through the Capitol,” Heidler said. “He is unfit to hold the nation’s highest office and must be removed. At least four Americans died during the riot and at least 360,000 Americans have died of COVID-19. Trump is responsible for both, and sadly all four Republican U.S. Representatives are complicit.’’

Heidler lambasted State Rep. Mark Finchem (R-LD11) for promoting Trump’s stolen-election conspiracy theories and urging Arizonans to join Wednesday’s mob, calling it “a betrayal of his office and his constituents. The Legislature should expel him. Failing that, he should face a recall.’’

Finchem, whose district includes part of Pima County, was reelected in November. He posted photos of himself with the rioters outside the Capitol on Wednesday.

The sight of Confederate flag-carrying white nationalists and neo-Nazis roaming the Capitol should shock the conscience of all who saw it, said Heidler, but she noted that ultimately, democracy prevailed.

“Congress did its job by certifying President-elect Joe Biden’s clear-cut Electoral College victory,’’ Heidler said. “And thanks to Georgia, Biden will have a unified Democratic Congress. We can look forward to the Biden administration enacting policies that will begin to heal our traumatized nation and restore the rule of law.’’

She cautioned however, “If doubts remain that white supremacists represent the nation’s most dangerous terrorist threat, yesterday’s mayhem should erase them. Groups such as the Proud Boys posted videos and photos of their leaders defiling the Capitol. Instigators urged followers to commit murder. We saw nooses at the Capitol. Twitter users referred to ‘Day of the Rope,’ when white nationalists will lynch journalists, politicians and other ‘race traitors.’ Someone carved ‘Murder the Media’ into an office door.’’

“Does anyone doubt that Capitol Police would have greeted Black Lives Matter protestors differently? During debates over healthcare, Capitol Police dragged peaceful protestors out of their wheelchairs. On Wednesday, officers held the doors open so that Proud Boys could take selfies in the House Chamber.’’

Congress must get back to business, Heidler said.

“Millions of Americans have lost their jobs. People are dying. People can’t feed their families and our planet is in peril. These are important issues that the current administration and the Republican Party, including Gosar and Finchem, are ignoring. Removing Donald Trump from office is the first step toward helping millions who are suffering.’’

Following reports that someone vandalized Pima County Republican Party headquarters Wednesday night, Heidler said, “There is no place for political violence in our democracy. We unambiguously denounce this act. It was criminal.”

For more information or to arrange an interview with Ms. Heidler, please contact PCDP Executive Director Joshua Polacheck at joshua@pimadems.org