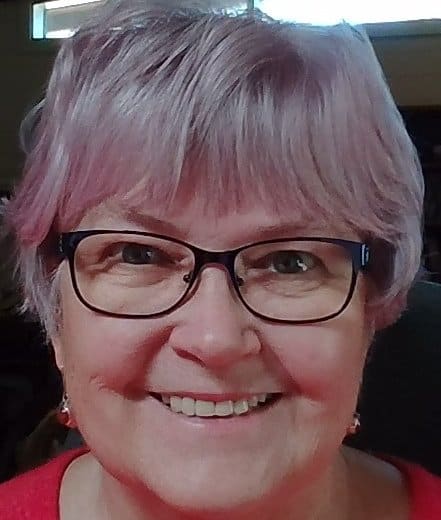 I have been volunteering in the office since April of 2019. By the time the office closed for COVID, I was working all day on Fridays as the Friday volunteer coordinator.

When we closed, I continued to volunteer from home by checking voicemail messages and responding to callers. Those days, in the summer before the 2020 election, we had many callers with a variety of urgent needs, and that was a very rewarding time for me, as I would do my best to find solutions to problems such as registering newcomers who could not get an AZ license (which meant they could not register to vote) to just being an empathetic person on the other end of the line. I still enjoy trying to solve problems of voters who either call or come to the office.

I am a lifelong Democrat, and I joined the second Obama campaign in 2012 because a friend of mine recruited me to work in Headquarters as a shift manager. In those days we didn’t have MiniVan so one of my jobs was entering call sheet data. I also greeted and trained new volunteers, some who were too young to even vote. I enjoy being part of an energized team.

Thank you so much for all your hard work, Margaret! 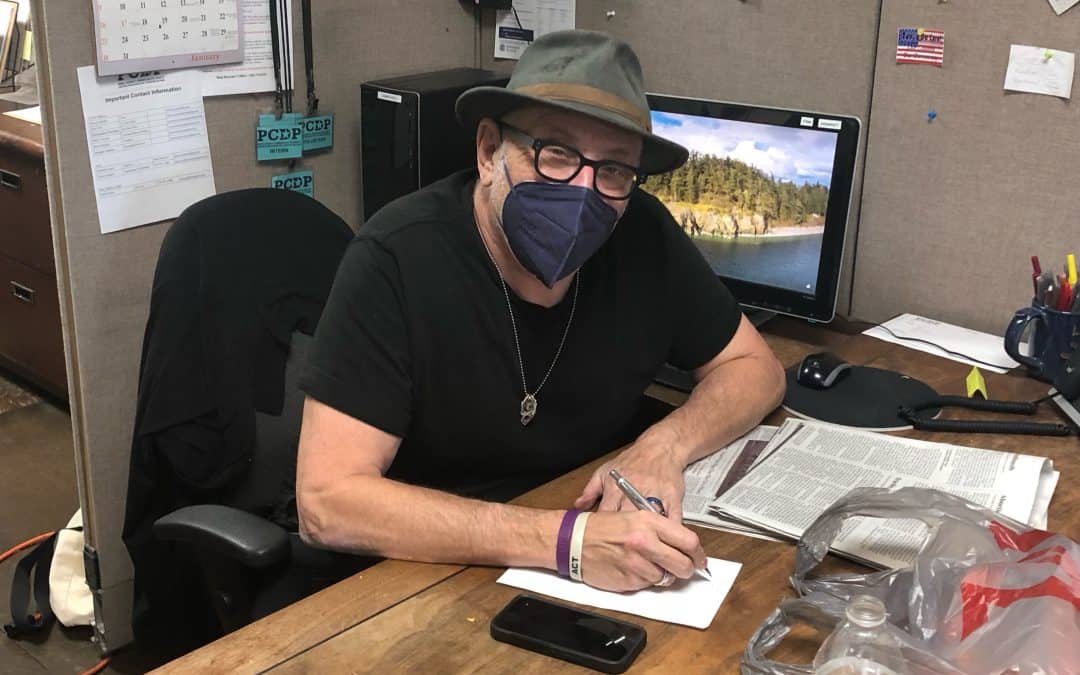 Thank you so much for all your hard work, Gordy! 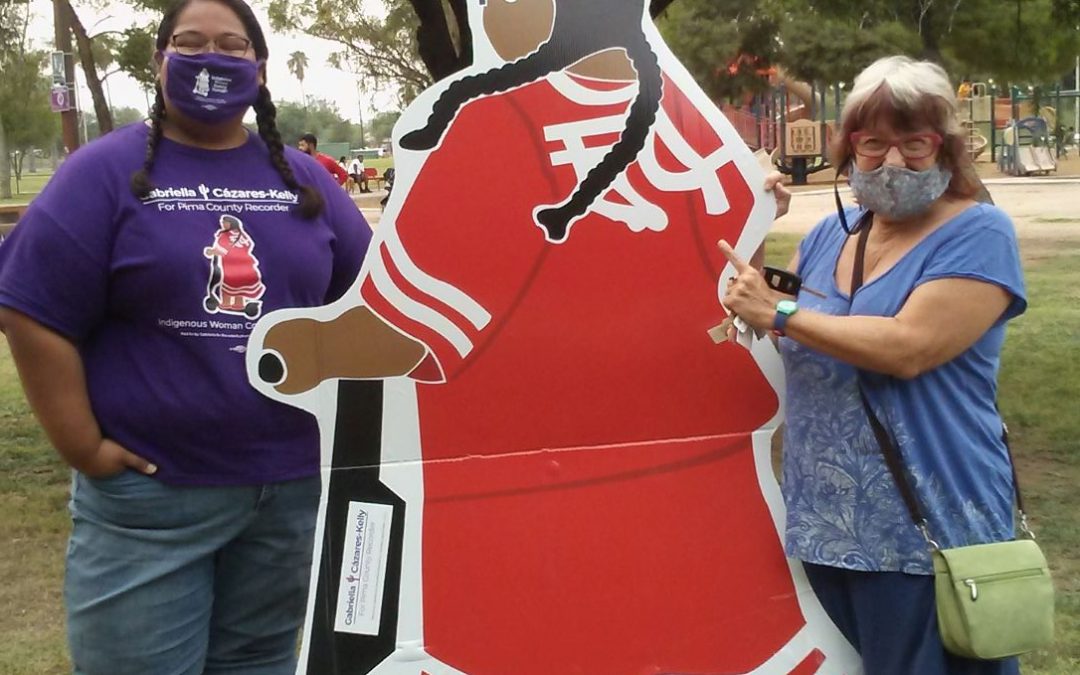 My favorite would have to be the yard sign room during the 2020 election. An absolute madhouse at times, and so much fun. My second favorite lately would have to be lending an ear to the frustration of Democrats in regards to voting rights and labor legislation on the hill, and having information about how to act on that.

I have been volunteering in the office only since 2019. Between 2015-2019 I came in for phone banking and canvassing during elections.

I have been a Democrat all my life. My parents were both good Democrats. I went to high school here in Tucson and Mo Udall used to drop by the school’s cafeteria for little chat sessions, as both of his daughters went to CDO .The first election I worked on was George McGovern’s Presidential campaign when I was 17 and in college in Lawrence, Kansas. After that I continued as a precinct captain, campaign manager for a state election, and basically anywhere I was asked. I lived in Spain between 1988-2014 (ask me about the wonders of National Health!) As soon as we came back to the US, here in Tucson, I contacted the PCDP and here I still am.

Thank you so much for all your hard work, Judy! 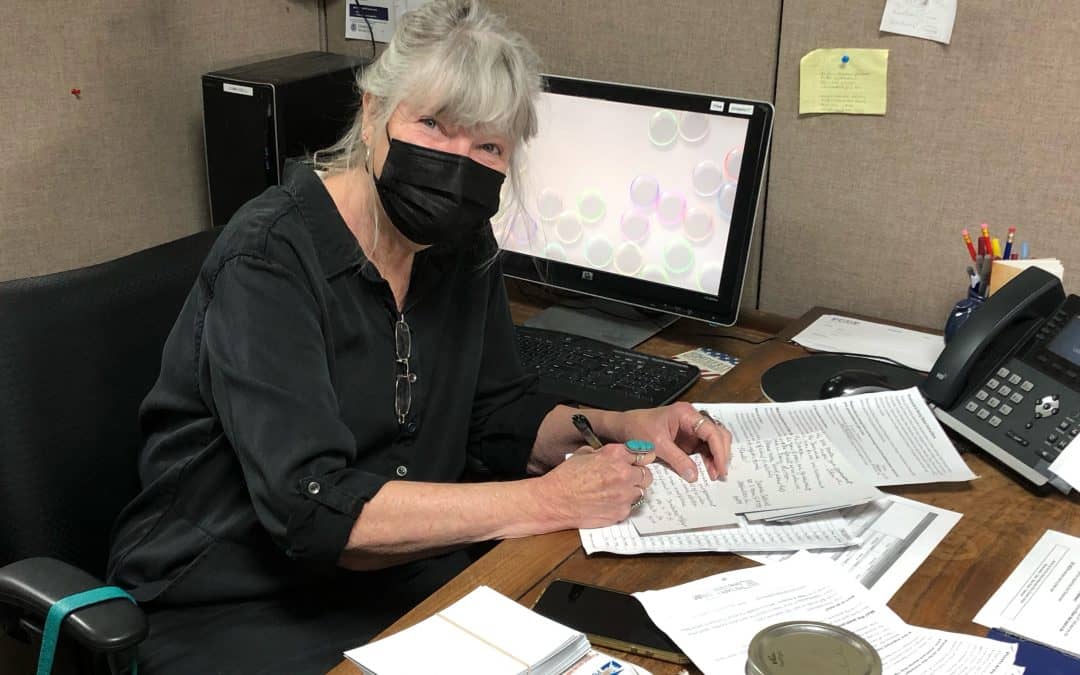 I love interacting with future leaders and getting to talk to the people who come in and call. Every phone call I’ve had has felt important and useful.

The Republican Party. Plus, a genuine fear that even after Biden was elected, things are not fine. I felt an urgency.  And I think there are a lot of people my age out there who feel an urgency. I think there’s a lot we can do to help.

Thank you so much for all your hard work, Kathleen!

I wanted to take a moment here, as we head into the summer of 2021, to give you an update on what’s been going on here at the office. I am planning to write more of these monthly blog posts so you can see how PCDP is working every day to elect Democrats up and down the ballot here in Southern Arizona!

As you may already know, we onboarded a new PCDP administration in January of this year. Since then, there have been a few changes, but we are now fully staffed with a Chair, First Vice Chair, Second Vice Chair, Corresponding Secretary, Recording Secretary, Treasurer, Operations Coordinator, Social Media Strategist, Website and Graphic Designer, and Director. In addition, we also have some new interns in the office who are helping with everything from our communications to fundraising.

PCDP is cautiously optimistic that we may soon host an office re-opening event where people can come in to meet our new folks!

In the meantime we have started to open our office again to volunteers, who have dedicated their time to make sure our office operations continue to run smoothly. We’re also planning hybrid events, where people can join either in person or via Zoom.

Of course, we have continued to build our strategy for how we are going to contact the 18,000+ Democrats in Pima County who are now at risk of being removed from the AEVL list. We also monitor #fraudit and redistricting, both of which threaten the integrity of the elections process. Every day as restrictive abortion and voting rights laws continue to pass in the Arizona state legislature we are reminded of what is at stake if we do not act.

The 2022 campaign season has already begun, and we need your help to make sure we are ready to fight for the next 17 months so we can keep Arizona blue.

On election night of 2022, as the results start coming in from all over the state, I do not want to be asking myself if I could have done more; I know I will have done all that I can to ensure that Democrats win up and down the ticket.

If you haven’t already this year, please take a moment to think about all you are doing to help elect Democrats, and ask yourself if there is any room to take on more. Whether it is increasing a donation, committing to volunteer, or writing to your representatives, every act of political engagement will enable PCDP to fight for your Democratic values.

I am incredibly grateful to be working with such a wonderful community, and I’m excited to see where we will take PCDP next!

Thank you, and stay safe! 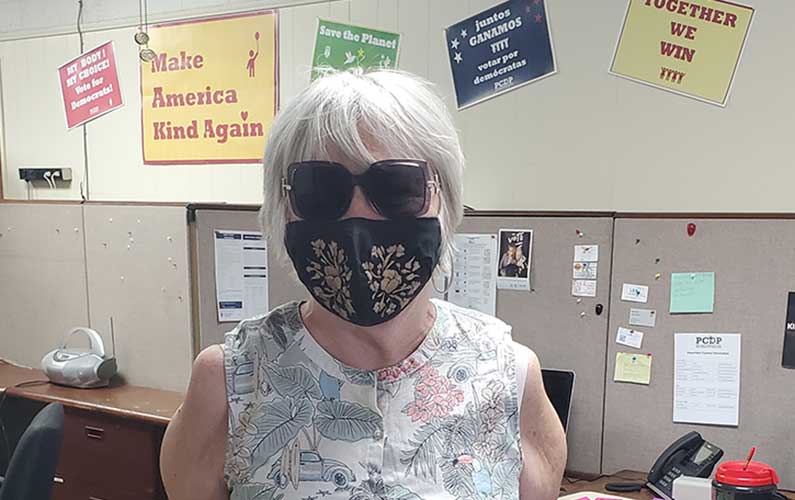 Patti is a born and raised Tucsonan who, after attending the University of Arizona, became a pharmacist. She always kept up with politics, but the “chaos and insanity of 2016” brought Patti to the PCDP Headquarters, and she’s been volunteering ever since, making calls and answering the office phone. Although she’s learned a lot from working here over the last five years, Patti says that her favorite part about volunteering is really the people she has met while working in the office. Even though it is quiet for the time being, there is still plenty to do. We are so grateful for all the (socially distanced) work Patti has continued to do in preparation for PCDP to re-open! 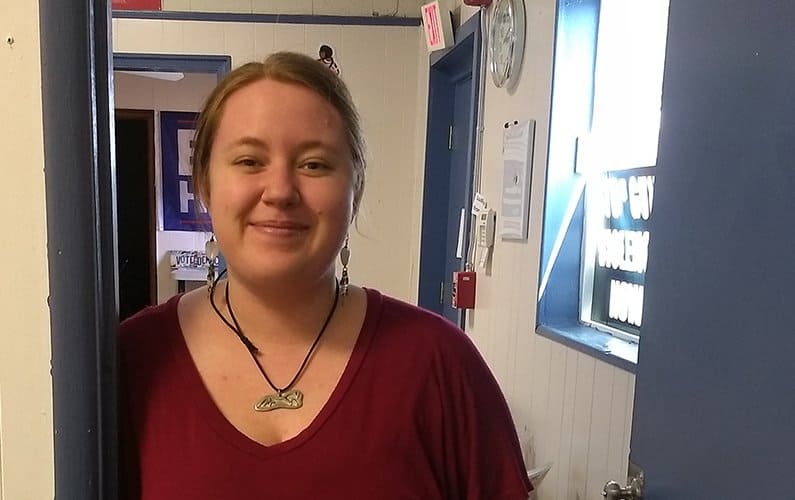 Maria has been volunteering with the party for a few years now, and has been one of the first to jump back onboard to help out in the office with daily tasks! Her bright smile and organizational skills have helped us tidy up our physical and virtual spaces, and we are excited to continue working with her.

When asked why she volunteers her time, she said, “I volunteer because I love feeling like I’m making a difference and being helpful to my community, and meeting other people who feel the same! And I’m passionate about electing democrats because I want my future kids to be a lot less worried about the future than I am.”

If you are ready to get involved, in person or virtually, fill out this form.

Heading into my first full month as PCDP‘s Chair, I knew I’d be inundated with party business, taking a break on January 20 to celebrate the inaugurations of President Joe Biden and Vice President Kamala Harris. But on January 6, two days after the first Executive Committee meeting of 2021, the unthinkable happened: an armed assault on the United States Capitol, where our elected representatives were meeting to certify the election results. Suddenly, I found myself on television, after KGUN and Univision requested statements about the insurrection. I was honored to speak for PCDP about this traumatic event.

But then came the day for which we all worked so hard the past four excruciating years – and for which American women and girls have waited a lifetime. Kamala Harris, the first woman and the first African American/South Asian American, ascended to the nation’s second highest office. With tears of joy in my eyes, I watched Joe Biden take the oath of office, and in a speech both reassuring and inspiring, promised a return to decency and compassion in public life. Once again, I was proud to represent PCDP on KVOA, which had asked for a statement about the inauguration.

We held an officers and LD chairs retreat to start developing our strategic plan for the next two years.  We completed the Mission and Vision Statements.  I am working towards having the strategic plan ready to present at our next Executive Committee meeting in March.

PCDP has begun sending weekly emails about timely topics to start our fundraising for this year.  We sent two this past month: one after the insurrection and one after the inauguration, which included a solicitation for commemorative bricks for Placita De Paz, the front patio at headquarters.

I attended the monthly LD chairs call, as well as attending all the virtual LD committee meetings in January.

I spoke at Democrats of Greater Tucson about the vision for PCDP over the next two years. And, I spoke at the Sabino Vista Democrats meeting about how they can get involved with party activities.

The most important item in January was getting our 2021 budget completed by the February Executive Committee meeting. Per our By-Laws, Caroline Garcia, PCDP Treasurer, worked tirelessly on getting our budget completed.  She took the Executive Committee through the process and how she developed the budget. The budget was presented and passed. Speaking of the EC meeting, Morgan Graham, our Recording Secretary, delivered her first set of minutes at the meeting, which were accepted.  Morgan will be getting involved in other committee work and reporting on it at the EC meetings.

Fundraising for PCDP never stops. First Vice Chair Nathan Davis is working on an event to help grow Cat Dems. Executive Director Joshua Polacheck has been helping Nathan by calling current Cat Dems. Nathan, Joshua and I are working on a fundraising plan for 2021.  We need to be laying the groundwork for 2022, which is going to be another big election year, especially for Arizona.  We need to finish turning AZ blue by flipping the state legislature and the governorship.

Party building has begun. Corresponding Secretary Priya Sundareshan is busy processing Precinct Committeepersons (PC) applications from the LDs. Again, this is to start building our ground game for 2022. We plan to educate every PC and volunteer so they know what to do and how to build relationships to educate the voters in their precincts.

Headquarters remains closed until COVID-19 numbers fall to a level at which re-opening is safe.  However, if you need to come to headquarters, please call and arrange for an appointment. Someone is there Tuesday-Friday mornings, but only by appointment.