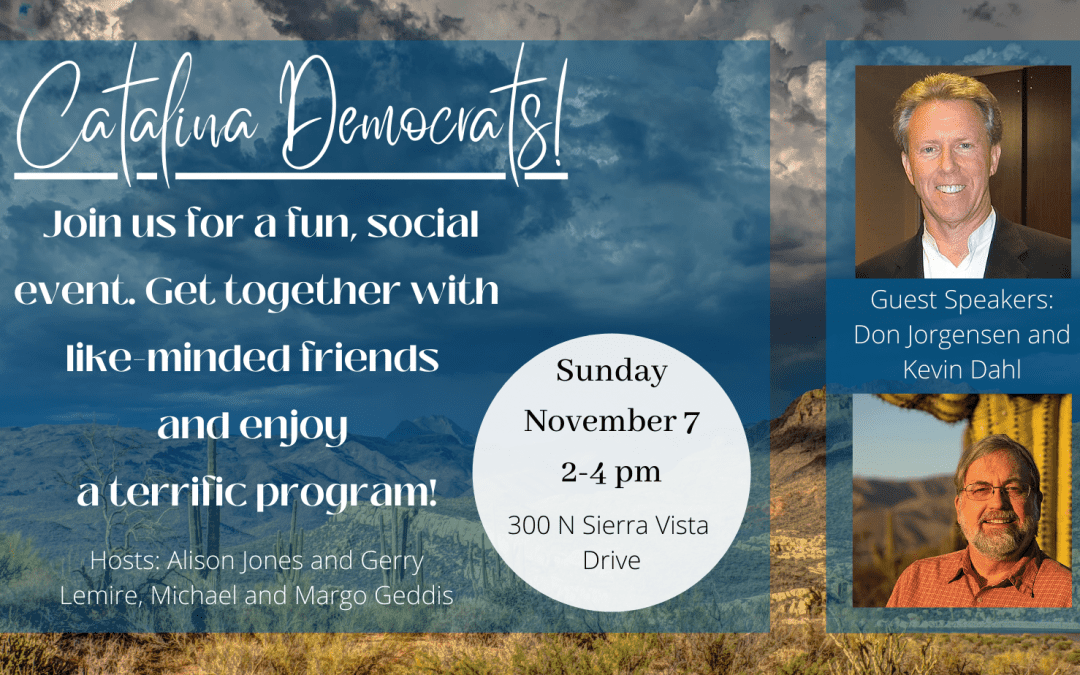 Catalina Democrats! Join us for a fun, social event on November 7 from 2-4 pm. Get together with like-minded friends and enjoy a terrific program! This is an event unlike past Catalina Democrat events.

Our speaker will be former PCDP Chair DON JORGENSEN who has a wonderfully entertaining presentation on his cruise to Antarctica. Based on that trip, he wrote a fascinating book titled, “Three Worlds, One Voyage: Cruising to Antarctica (and Trying to Get Home) during the Coronavirus Pandemic”. You will laugh and be amazed! Don is a terrific speaker. We promise this event will be a highlight of the autumn.

Ward 3 candidate Kevin Dahl will also be in attendance. Kevin is a dedicated advocate for addressing climate change.

Heading into my first full month as PCDP‘s Chair, I knew I’d be inundated with party business, taking a break on January 20 to celebrate the inaugurations of President Joe Biden and Vice President Kamala Harris. But on January 6, two days after the first Executive Committee meeting of 2021, the unthinkable happened: an armed assault on the United States Capitol, where our elected representatives were meeting to certify the election results. Suddenly, I found myself on television, after KGUN and Univision requested statements about the insurrection. I was honored to speak for PCDP about this traumatic event.

But then came the day for which we all worked so hard the past four excruciating years – and for which American women and girls have waited a lifetime. Kamala Harris, the first woman and the first African American/South Asian American, ascended to the nation’s second highest office. With tears of joy in my eyes, I watched Joe Biden take the oath of office, and in a speech both reassuring and inspiring, promised a return to decency and compassion in public life. Once again, I was proud to represent PCDP on KVOA, which had asked for a statement about the inauguration.

We held an officers and LD chairs retreat to start developing our strategic plan for the next two years.  We completed the Mission and Vision Statements.  I am working towards having the strategic plan ready to present at our next Executive Committee meeting in March.

PCDP has begun sending weekly emails about timely topics to start our fundraising for this year.  We sent two this past month: one after the insurrection and one after the inauguration, which included a solicitation for commemorative bricks for Placita De Paz, the front patio at headquarters.

I attended the monthly LD chairs call, as well as attending all the virtual LD committee meetings in January.

I spoke at Democrats of Greater Tucson about the vision for PCDP over the next two years. And, I spoke at the Sabino Vista Democrats meeting about how they can get involved with party activities.

The most important item in January was getting our 2021 budget completed by the February Executive Committee meeting. Per our By-Laws, Caroline Garcia, PCDP Treasurer, worked tirelessly on getting our budget completed.  She took the Executive Committee through the process and how she developed the budget. The budget was presented and passed. Speaking of the EC meeting, Morgan Graham, our Recording Secretary, delivered her first set of minutes at the meeting, which were accepted.  Morgan will be getting involved in other committee work and reporting on it at the EC meetings.

Fundraising for PCDP never stops. First Vice Chair Nathan Davis is working on an event to help grow Cat Dems. Executive Director Joshua Polacheck has been helping Nathan by calling current Cat Dems. Nathan, Joshua and I are working on a fundraising plan for 2021.  We need to be laying the groundwork for 2022, which is going to be another big election year, especially for Arizona.  We need to finish turning AZ blue by flipping the state legislature and the governorship.

Party building has begun. Corresponding Secretary Priya Sundareshan is busy processing Precinct Committeepersons (PC) applications from the LDs. Again, this is to start building our ground game for 2022. We plan to educate every PC and volunteer so they know what to do and how to build relationships to educate the voters in their precincts.

Headquarters remains closed until COVID-19 numbers fall to a level at which re-opening is safe.  However, if you need to come to headquarters, please call and arrange for an appointment. Someone is there Tuesday-Friday mornings, but only by appointment.