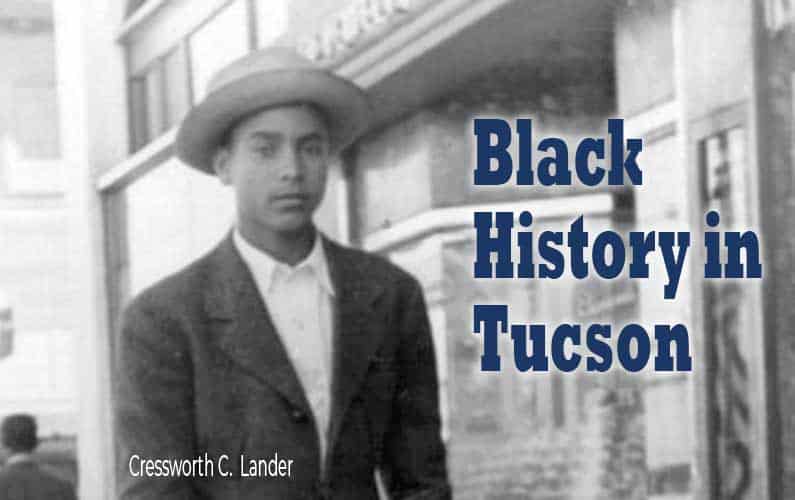 In honor of Black History Month 2021, we pulled together a collection of news stories, books and recordings illustrating the long history of Black families in Tucson. We include a University of Arizona website that documents the stories of Black explorers and settlers all the way up to a directory of current Black-owned businesses in Arizona. It is a rich and varied history, and this just scratches the surface. We welcome contributions to add to the story!

The story of Dunbar, the neighborhood that took its name from the school in its midst, is in many ways the story of America. An almost forgotten 160-acre swatch of land north of the town of Tucson, Arizona, it was inhabited by a hardy mix of Anglos, Mexicans, Yaqui Indians, colored people (as African-Americans were called then), and Chinese. Separated from downtown Tucson by the Southern Pacific Railroad tracks, Dunbar’s northernmost blocks had been the Court Street Cemetery since 1875. Then, in 1912, statehood changed everything. It introduced mandatory school segregation which forced colored children to attend schools built only for them. In response, the Tucson school board converted an undertaker parlor/bakery into such a facility. Within five years the increasing number of students led to the construction of a school at 300 N. 2nd Street, which became the focal point of the neighborhood. The board named it the Paul Laurence Dunbar School after the renowned colored poet. Dunbar: The Neighborhood, the School, and the People, 1940-1965 tells the heartfelt and moving story of that community, and the other neighborhoods that fed into the school, as they all grew and thrived. It is told, as much as possible, using the words of those who lived it. The twenty-five years noted in the title began with the arrivals of Principal Morgan Maxwell, Sr., and Dr. Robert D. Morrow, superintendent of Tucson School District No.1; it spanned three wars, the first school integration, and the march of history. From Good Reads

Sadie Shaw (recently elected to the TUSD school board) grew up spending time in Sugar Hill, created a collection of oral histories of the neighborhood.

Her uncle would often tell her stories of her family or characters who lived there. “I learned to swim over here at the Mansfield pool. I learned how to whistle here.” she said. When he passed, she missed the stories of this Tucson neighborhood, so, she set out to make them permanent.

“A lot of people don’t know about this community, and they don’t realize it was once a black community and it still is,” Shaw said.

“Sugar Hill, less than a mile from the UA campus, was one of the few places in Tucson where black professionals could buy a home between World War II and the passage of civil-rights legislation in the ’60s.”

Didn’t Come From Nothing
An African-American Story of Life
by Tani D. Sanchez. Phd.

In The Steps of Esteban website brings historical documents of Tucson’s African American community online. It includes digital versions of several print documents, including a 1933 University of Arizona masters thesis. Copies of rare and fragile photographs from archival collections add to its visual appeal. The development of In the Steps of Esteban is an on-going project

In The Steps of Esteban – online!
In the historic Dunbar School
Black owned businesses