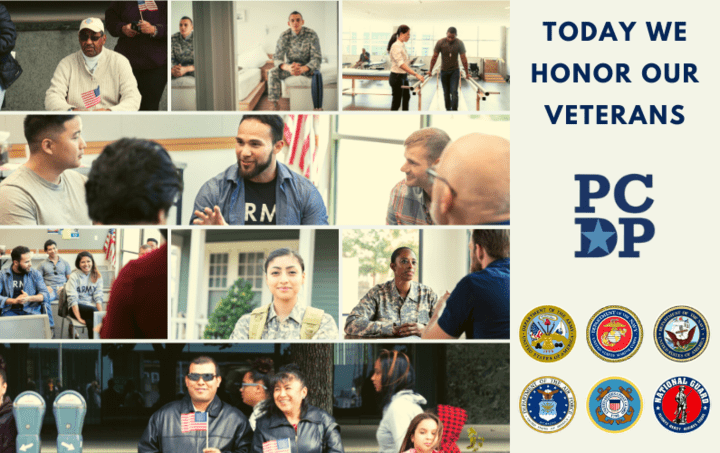 The Pima County Democratic Party honors all of our veterans, and we are incredibly humbled by the diversity of our nation’s Armed Forces. In fact, many of our very own staff and volunteers are veterans of all military branches and conflicts.

Arizonans of all backgrounds choose to serve our nation for all kinds of reasons, and we are eternally grateful for their service. When our state and nation sends our service members to fight wars far from home and in incredibly dangerous places, they must care for them and their families when they return. Honoring our veterans means making sure our state and nation fulfills this sacred promise.

Our mission here at PCDP when it comes to Arizona veterans is to ensure that we elect lawmakers who are committed to providing the vital resources necessary to support the mental health, housing, medical, and work-related needs of our veterans and their families.

We wholeheartedly believe that President Biden’s Build Back Better Act includes absolutely essential legislation that will transform the lives of our Soldiers, Sailors, Airmen and Marines who have served our nation and state. When we help veterans in their daily life, we help them thrive and continue to serve all of us.

It is important to remember that the strength of our military is that it’s made up of Americans who directly reflect our society. They are us, we are them, and so caring for them is really caring for all of us. A social safety net, a liveable wage, a healthy planet, paid family leave, safe child care, and universal medical care are things veterans and all Americans desperately need.

Brian Bickel: Brian currently volunteers as our Treasurer. Brian is a Marine (there is no such thing as a former Marine). He served in Vietnam from March 1970 to March 1971. After his return to the states, he was stationed at Marine Corps Air Station Yuma. #SemperFi

William Laray: Bill has volunteered with PCDP for three years as our Facility Operations Manager. He is a 25 year Veteran of the US Navy, Designated as an Aerospace Engineer Duty Officer, he worked in RDT&E of Naval Aircraft and Associated Systems. He retired as a Navy CAPT in 2012. #AnchorsAweigh

Shelly Goode-Burgoyne: Shelly is our Social Media Strategist. She is a former Army Officer who deployed to the Iraq War during Operation Iraqi Freedom I and III. She served as a Transportation Officer, leading re-supply convoys to forward units in Iraq and the surrounding territory. She is married to an active duty Army Officer. #ArmyStrong

In the spirit of Between Two Ferns with Zach Galifianakis…we bring you our desert version this election season. In this tongue-in-cheek interview hosted by Billy Peard, you’ll meet Brian Bickel, running for Pima County Treasurer.