The following statement may be attributed to Alison Jones, Chair of the Pima County Democratic Party

It comes as no surprise that a lawless president would ignore a longstanding agreement to consult with the Tohono O’odham Nation before blasting lands held sacred for 10,000 years.

Nor should anyone be surprised that contractors are bulldozing cacti in Organ Pipe National Park, felling cottonwood trees on the San Pedro River or that the rush to build Trump’s monument to himself is threatening groundwater and disrupting migration patterns.  The Sierra Club counts 38 federal environmental protection laws suspended to build the wall.

No one was shocked when the president plundered funds from the military budget to build his wall – five times more than Congress authorized.

And it’s business-as-usual when Trump pressures the Army Corps of Engineers to award Fisher Sand and Gravel Company a $400 million contract after the North Dakota company lobbied for the job on Fox News. The contract for the steel was won by Zekelman Industries, which donated $1.7 million to a pro-Trump super PAC, the Star reported.

Trump’s monument to fear is an example of the chaos and corruption that infests this administration. Instead of the comprehensive and humane immigration policy this nation so sorely needs, this “businessman” opts for a multi-billion-dollar wall that anyone with a homemade ladder can scale. This is one of many reasons why Arizonans are changing their party affiliation to Democrat and will turn Arizona blue in November. 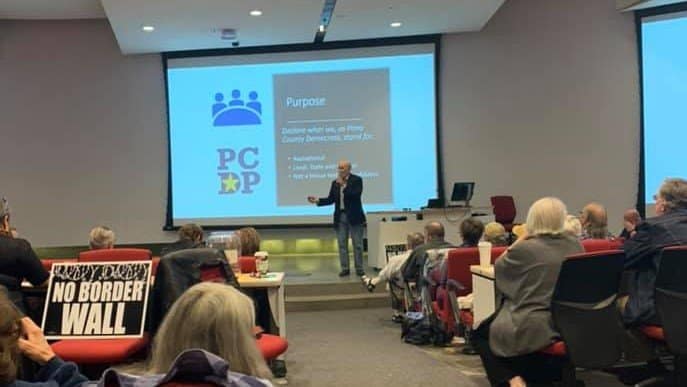 The challenge was a perfect fit for Phil, a, longtime party activist and four-term state representative.  From joining the first Peace Corps class in 1961 to joining Pima Community College’s first faculty in 1969, Phil knows how to create something from nothing.

PCDP Chair Alison Jones said, “I first heard of the plans to propose building a platform at the LD3 monthly meeting in November 2018. Bill said we need to stand for more than just electing Democrats. It was time to articulate our values to energize Democrats, and let voters know where we stand.”

A few weeks later, Bill made a motion at the PCDP Reorganization Meeting that PCDP form a platform committee to do just that. The County Committee passed the motion, and Alison appointed Phil and Paul Taylor as co-chairs.

By March, the two had recruited 15 volunteers who met at least bimonthly for eight months.  Experts in the community contributed valuable information on issues like education and housing. Focus groups provided additional insights from typical voters.

“We started with a blank slate,” Phil said. The platform committee represents the diverse constituencies that make up PCDP. It was a lot of work, but the committee produced a platform PCDP will be proud of.”

PCs unanimously approved the platform on December 7 at the County Committee Meeting.  It covers 16 subject areas:

Positions on specific proposals, or “planks,” are listed for each subject.

“I hope PCs will see the platform as a way of identifying ourselves,” Phil said. “The platform is intended to be a living document that will evolve as circumstances and viewpoints evolve.” 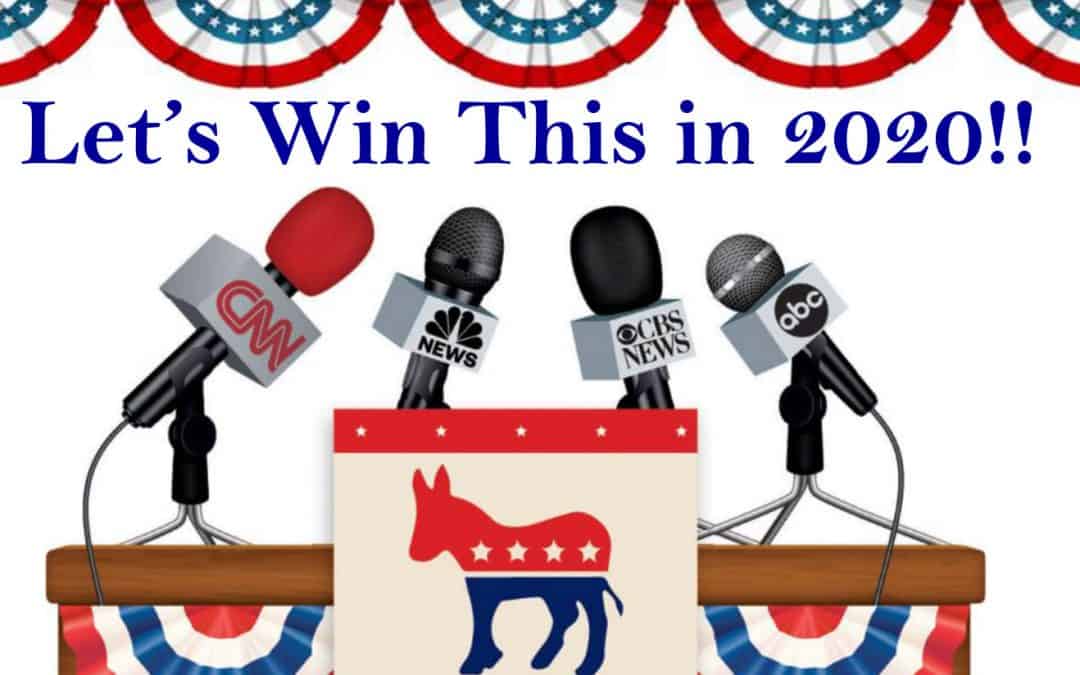 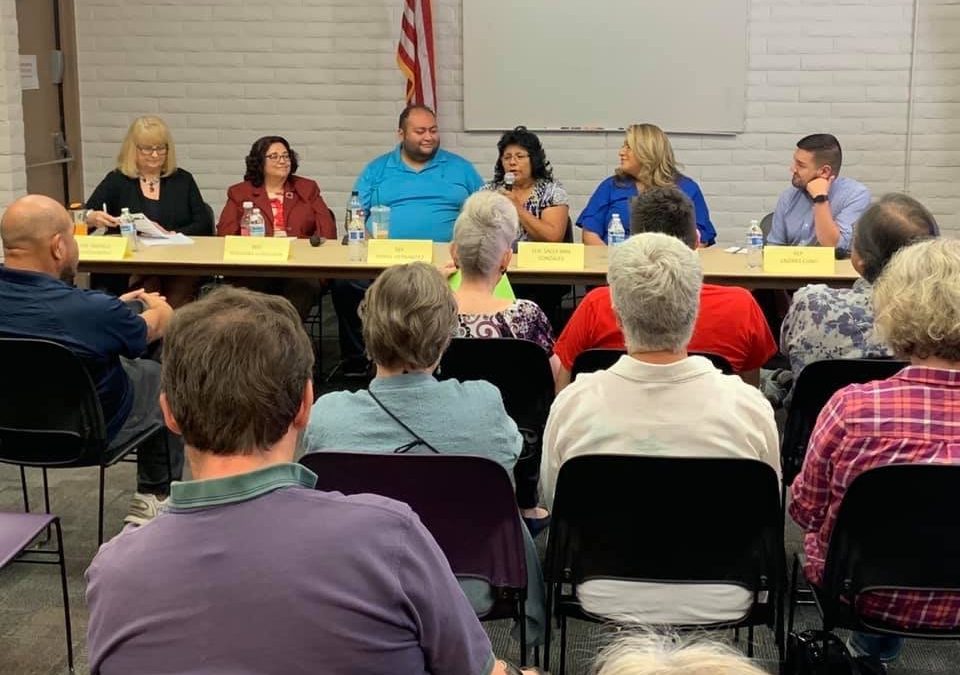 On Sunday, May 28th, all six legislators from the two Legislative Districts spoke and answered questions from a 60-person audience at our combined Town Hall at the Valencia Library. They addressed a wide range of concerns, including education funding, dealing with violence and suicide, voting rights, public health, border issues, climate change, water, transportation, ERA, the proposed budget, and how citizens can and should influence the Legislature. Michele Manos, interim LD 2 chair, skillfully moderated the session.

The PC and Volunteer Committee is identifying precinct leaders for each of our 57 precincts. We currently have 195 PCs, with a goal of 230 by year’s end. Precinct leaders are being trained to organize PCs and volunteers for activities related to our quarterly themes leading up to the 2020 election. Some precincts will “adopt” precincts that have no PCs.

Many precincts are thanking our fall 2018 “targeted” voters – those who didn’t vote in 2014 but did in 2016 – with door-to-door palm cards or postcards. Undoubtedly these targeted voters contributed to LD9’s high voter turnout.

Our Voter Registration Committee is identifying strategies for registering new voters through the fall. Current efforts include high school and community college students, new residents, special events, and specific locations. By winter, we’ll be emphasizing the Presidential Preference Election (PPE) and targeting voters registered as Independents (who’ll need to switch to Democrat to vote in the PPE).

About one-third of LD9 voters live in the City of Tucson. We’re encouraging them to attend city election and initiative events. Many of our PCs and volunteers are circulating Outlaw Dirty Money petitions and are involved in supporting the Pima County Preschool Investment Proposal and the Red for Ed movement.

We’re raising money through Blue Wave 2.0 recurring donations and LD9 t-shirt sales. The popular LD9 Happy Hours – a great way for new PCs to meet others in a relaxed setting – will continue. We collected donations for the Benedictine Monastery refugees at our last LD9 meeting.

Our next monthly meeting will be Tuesday, May 28, 6:30 p.m.- 8 p.m. at Water of Life Metropolitan Community Church, 3269 N. Mountain Ave. Meetings feature speakers and state legislative updates. Please join us!

It has been a hectic first quarter in LD10, as we gear up to elect Democrats for Tucson’s mayor and city council. This is part of laying the groundwork for 2020: electing Democrats at the federal, state, and local level.

We launched our Voter Outreach program, designed to register voters, grow our volunteer base, and increase the number of PCs in LD10. We’re off to a good start on the latter, having added 16 during the first quarter of 2019, raising the total from 96 to 112. Our goal is to recruit 50 new PCs by the end of the year.

Please join us at LD10’s monthly meeting, the third Wednesday of the month at the Unitarian Universalist Church, 4831 E. 22nd St., 6:30 p.m. – 8 p.m. (social time 6 p.m.) Tucson Mayor Jonathan Rothschild will talk about his accomplishments as mayor and his vision for Tucson’s future at the May 15 meeting.

We have been busy in the first quarter of 2019 planning our annual LD11 fundraiser, which we held on May 4 in Sun City, Oro Valley. The theme was Cinco De Mayo. Speakers included U.S. Senate candidate Mark Kelly and Arizona Daily Star editorial cartoonist/humor writer, David Fitzsimmons. Look for a recap in the next newsletter.

In our efforts to increase voter registration, our Voter Action Committee has been working with a great group from Southern California, called Field Team 6, which helped turning Orange County blue. We will soon start holding events in various “hot spots,” and hope to register many new Democratic voters. As the registered Republican voters outnumber Democrats by 17,000 in our district, we need as many new Democrats as possible!

We are also planning our first PC Summit, on May 19 at the Oro Valley Library. The objective is to engage and train our PCs and recruit new ones. Steve Farley, candidate for Tucson Mayor, will give the keynote speech.