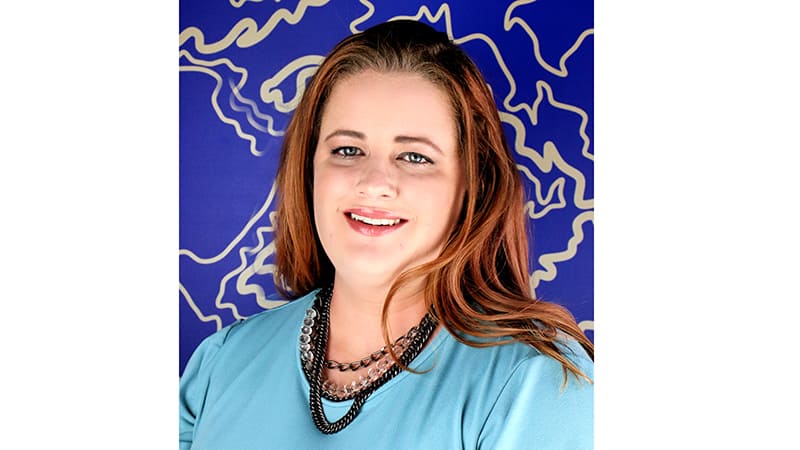 The role of Recording Secretary is vital to every organization, and the Pima County Democratic Party is no exception. Zoey Fife was appointed to that job last August and elected to the post at PCDP’s annual meeting in November.

In addition to taking minutes at monthly meetings, Zoey enjoys pitching in with PCDP events, like the Udall dinner and the mayor’s inaugural luncheon.

“When events come off without a hitch, I feel like something important was accomplished,” she said. “I look forward to the day we can safely meet in person and celebrate our hard work through the pandemic.”

Zoey moved to Tucson from Colorado five years ago to work as data systems manager at the Community Foundation for Southern Arizona, which supports local nonprofits and helps donors establish funds to manage their philanthropy. She enjoys working to support the community in this role.

Zoey graduated from Colorado State University in 2013 after an internship in Washington, D.C., with Colorado Sen. Mark Udall. She also volunteered with the 2008 Obama Presidential campaign.

Before her recent move to the Armory Park neighborhood in LD 3, Zoey was LD 10 First Vice Chair. “I’m still getting settled but plan to get more involved in LD 3 as the election approaches,” she said.

“I’ve always felt a duty to be involved,” Zoey said. “My parents raised me to be politically engaged. Too few young people take the time to get involved. It’s a shame because it’s our future that’s at stake. We need to lead now. It’s easy to sit around and complain, but it will take a ton of work and tons of volunteers to get the future we all want.”

Zoey enjoys being involved in meetings at the executive committee level. “Responsibility for the minutes keeps me engaged,” she said. “And I really enjoy helping with events. I’m very grateful to be working with such capable leaders as Alison, Cat, and the volunteers.”

Zoey has Trump-supporting relatives. “It’s a challenge,” she said. “The fear that he creates in his rallies, tweets, and public statements are so powerful. His rhetoric drives much of the hatred and fear we see in the country – like how he thinks it’s unmanly to wear a mask. When people are convinced they should be afraid of their neighbors, the government, and people who look different, it’s hard to recover from that.”

The Kansas native recenyly adopted a dog, Daisy, and enjoys crafting, sewing, and spending time with friends. She is also working on Cat Ripley’s campaign to represent District 1 on the Pima Community College Board.

Among the other women who inspire her: Alexandria Ocasio-Cortez and Elizabeth Warren.

“Elizabeth Warren’s campaign was one of grace and compassion,” she said, “such a stark contrast to Trump’s, but still effective and meaningful. AOC is my age and I admire how engaged she is in her community. They are both examples of women leading the party forward and doing it in their own unique ways.”