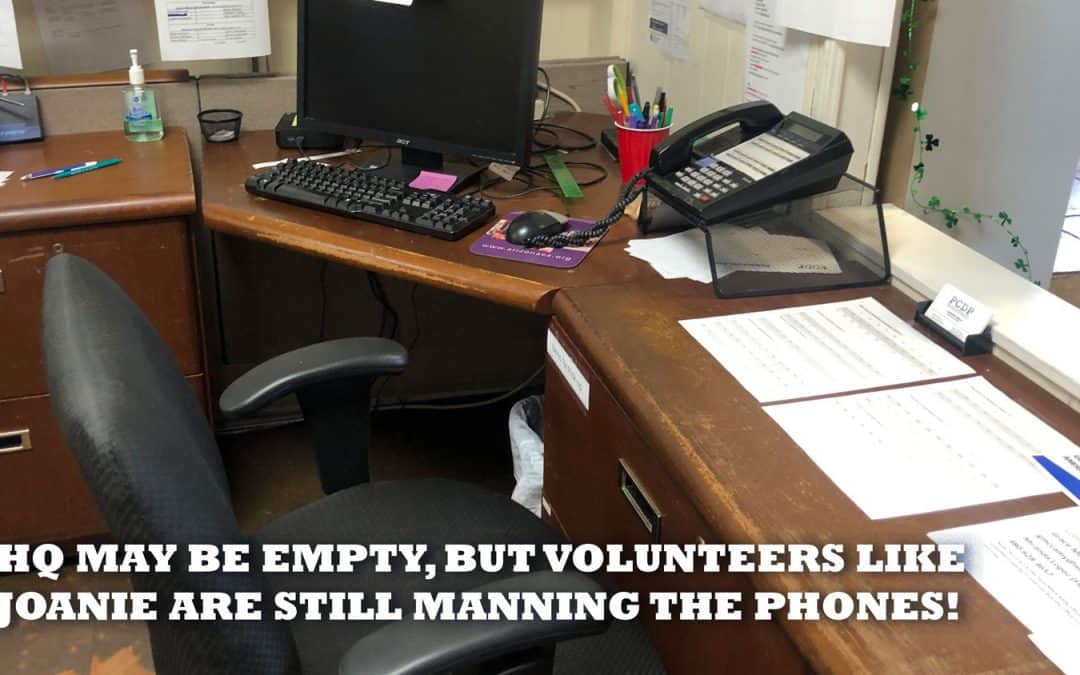 Golfers Joanie and Jim Allison grew to love Tucson during their February visits to Dove Mountain’s Accenture Match Play Championship golf tournament. When asked about her proficiency as a golfer, Joanie would only say the greenskeepers of Alexandria, VA, celebrated when the Allisons retired to Tucson in 2012.

Joanie leads Thursday’s morning and afternoon volunteer crews at PCDP headquarters. Now working from home, she returns phone calls and answers questions about everything from voter registration to road repair. Her favorite calls are inquiries about registering as a Democrat.

Joanie grew up in Helenville, WI, then attended Cardinal Stritch College – now University – and court- reporter school in Milwaukee. After a career as a court reporter, she volunteered for the White House Correspondence Office and for President Barack Obama’s campaign. Jim was an attorney in Milwaukee and later with the Equal Employment Opportunity Commission in Washington, D.C.

Joanie and Jim’s son Joe, daughter-in-law Becky and granddaughter Kaylee, live in Salem, OR. Halle, the dog, guards the family home in Tucson’s Sam Hughes neighborhood in LD9. Why Halle was named for the Oscar-winning actress, Halle Berry, is a closely-held family secret.

Said Joanie: “Like most of us, Donald Trump is the reason I’m working for Pima Democrats. I have to do whatever I can to get Trump out of the White House and elect Democrats from the top of the ballot to the bottom. America would not be the same country after four more years of Trump.  He lies. He cheats. He mistreats women. He belittles people. He offends our friends and cozies up to our enemies.  He and his enablers in the Senate should be ashamed of themselves.”

“In recent generations, our greatest presidents have been Democrats. FDR, Jack Kennedy, and Barack Obama worked for the people, and their records prove it. I know President Biden will follow in that tradition.”