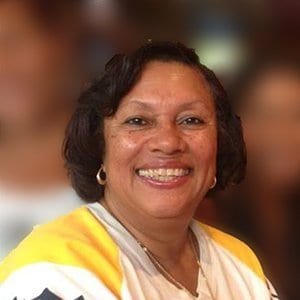 Bill Clinton’s presidential campaigns introduced Connie DeLarge to politics, but it was George Bush’s election in 2000 that motivated her to jump in with both feet.

“President Bush helped me understand the importance of electing Democrats to lead our country,” she said. “Anyone who doesn’t understand that now has been asleep at the switch.”

As corresponding secretary for the Pima County Democratic Party, Connie oversees the Precinct Committeeperson (PC) application process. She verifies that prospective PCs are registered Democrats and that applicants have completed their paperwork before submitting it to the Pima County Board of Elections and Board of Supervisors for approval.

Connie serves on the Community Justice Board, which oversees diversion programs for youthful offenders. Eligible non-violent offenders can have their criminal records expunged at age 18 after graduation from a board-approved program, which typically entails writing an apology letter, reading self-help materials, keeping a journal, and community service. Participants must perform an “Act of Kindness,” and have no further contact with police.

Connie, who worked for a production company, came to Tucson from Los Angeles in 1994 when Hughes Aircraft transferred her husband, Clement, here. They live in Continental Ranch in Northwest Tucson (LD11), and enjoy visits from their 11 grandchildren and two great-grandchildren. They have two children and raised two grandkids.

An amateur genealogist, Connie traces her family tree back to 1825 when her ancestors built the Tuscumbia, AL., plantation on which they were enslaved. Once freed, her great-great-great-great grandfather started the area’s first Church of Christ. Another ancestor narrowly escaped lynching when a farmer’s barn burned down.

Connie is committed to Donald Trump’s defeat in next year’s election.

“He’s a liar,” she said. “I can’t trust anything he says or does. He’s in it for himself, not the country.

But she added, “The country is fortunate to have a leader like Nancy Pelosi. At the rate things are going, she might be president one of these days. That would be fine with me.”