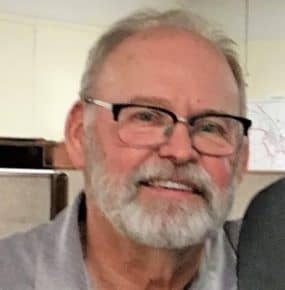 One of Bill Laray’s neighbors tells Bill that he has “failed at retirement,’’ for which the HQ staff is grateful.

Bill, a Precinct 94 PC in LD 10, shows up three days a week to “square things away,’’ as the Navy calls it: “getting the place organized, everything inventoried, equipment and systems brought up to date to ensure that we are ready for the 2020 campaign/election season.

“It’s been a bit of a challenge ferreting thing out,’’ says Bill, “but we are getting there, and we will be ready.’’

Bill spent his career as a civil servant, and in the U.S. Naval Reserve, following a family tradition of military service. His dad was a career U.S. Army officer and a staunch FDR Democrat.

Because he spent 36 years as a Hatch Act-covered federal employee, Bill had to limit his political involvement to voting, casting his first presidential ballot in 1972 for George McGovern.

“I lived in Washington, D.C., at the time, near Dupont Circle,’’ Bill recalls. “One of my favorite political memories of that time was the night Nixon resigned.

“It was the day after my birthday. We were watching TV in our first-floor apartment, all the windows open, enjoying the hot, humid D.C. summer evening air…We heard a cheer come up from all quarters of the city. Everyone went into the streets for a great, big street-party celebration. It was a great night in American History.’’

Bill left D.C. after the 1976 Bicentennial celebration on the National Mall, which he recalls as “pretty special. More than 1 million people literally took over the streets. It felt good to be an American.’’

Next stop: Tucson, with friends who had relocated here, “where the living was easy. I attended Pima Community College, then the University of Arizona, graduating as a Mechanical Engineer in ’81,’’ a year after marrying his wife, Carolyn, at the old Pima County Court House.

Then it was back to the D.C. area, where the Larays settled in St. Mary’s County, MD.

“Stenny Hoyer was my congressman,’’ Bill says. “I think I voted for him something like 14 times. I even enjoyed having dinner with him once.’’

After Bill retired in early 2017, the Larays, who have two sons, returned to Tucson.

Bill says that he got involved in politics last year for the same reason drew many others: “the need to do something more than complain on Facebook about what is happening to our country under the current regime.

“I started out canvassing for Cat Ripley’s campaign. After that I worked for the State Combined Get Out The Vote Campaign at PCDP HQ, and I must have made a good impression because they made me canvassing captain for the final two-week push before the election.

“I am proud to say I think we made a big difference in the election outcome. It was thrilling to meet all the candidates.’’

The New York Times even ran a picture of Bill shaking hands with now-Rep. Ann Kirkpatrick. He was also at HQ the day now-Speaker Nancy Pelosi dropped in.

After Cat Ripley became executive director in January, “she called to ask me if I would come help, and here I am!”

When he’s not at HQ, Bill likes exploring Tucson and environs with Carolyn, “enjoying the wonderful food, art and music scene,’’ and taking guitar lessons – after playing for 50 years.