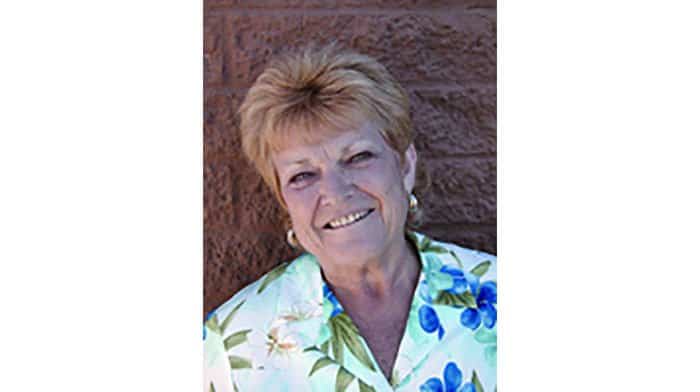 Mondays are busy for Jeanne Christie. First there’s Democrats of Greater Tucson lunch – she’s an officer – then it’s off to PCDP headquarters, where she’s been volunteering since 2011.

That year, her husband/soulmate of 30 years, Dan McCoog, died suddenly. Jeanne, a Rutgers University graduate who’d marched against the Vietnam War, for reproductive rights and the ERA in Philadelphia in her youth, looked around for a cause. That turned out to be all things Democratic in Pima County: HQ, Tucson Mayor Jonathan Rothschild’s campaign, the Tucson City Council campaigns of Regina Romero, Paul Cunningham and Shirley Scott, and the office of former Rep. Gabrielle Giffords, who’d barely survived an assassination attempt on Jan. 8 that year.

Gabby’s people were in mourning, as was she, so it seemed like a good fit. She says she was also “sick and tired of – figuratively – throwing bedroom slippers at Sarah Palin on tv.’’

What Jeanne brought to these enterprises was a longtime publicist’s savvy – and her mom, the late Kathleen Christie, who stuffed untold numbers of envelopes for former Rep. Ron Barber, Rothschild and others.

Jeanne had spent most of her career in the wine industry, doing marketing and PR, writing about wine – she was wine editor for Arizona Gourmet Living – and judging wine contests.

She and Dan came to Tucson for the first time in 1979. Dan went to work as the fabled Tack Room restaurant’s maître ‘d. They stayed until 1990, then moved to California’s Sonoma County wine country, where Jeanne worked for Dutton Estate-Sebastopol Vineyards, Chandon Estates, Simi Winery, and Geyser Peak Winery.

They returned to Tucson in 2004, when Hacienda del Sol named Dan its wine director/sommelier.  Together they launched Wine-ovations, a consulting firm that developed wine-education programs and restaurant wine lists.

Jeanne, who lives in LD 9, sits on the PCDP Executive Committee, the Nucleus Club board, is a state committeewoman and a member of PCDP’s African-American Caucus.

Although HQ seems quiet right now, Jeanne predicts that “when it gets busy, I’ll be jamming. City elections are very important. I’ll fight like hell for our mayor and city council, and I’ll continue to promote and build the brand for PCDP.’’

She enjoys phone banking in the dialer room, and “harassment by Republicans’’ doesn’t phase her.

“You just stay calm,’’ Jeanne says. “I never give them anything to fight back with.’’

You’d think she spells it “Jeannie,’’ because everyone knows her as “Jeannie.’’ But she’s actually Jeanne E. (for Elizabeth) Christie. Husband Dan called her “JeanneEChristie,’’ hence the pronunciation.

A “huge” basketball fan, Jeanne never misses a U of A home game, or the Golden State Warriors and the Philadelphia 76ers on tv.